Practice Like Your Hair is on Fire, or Why I Want to Do a Three Month Meditation Retreat in Nova Scotia

I just sent off my application for the Winter Yarne being taught by Pema Chodron at Gampo Abbey, January-March 2011. Here's my essay:

My first encounter with breast cancer was in 1997. I was not yet forty years old. I addressed it with surgery, naturopathy, and Tradition Chinese Medicine, including Tai Chi. I’d been through Shambhala Training nearly ten years earlier, and had done a dathun at Gampo Abbey in 1991. Now, I took refuge vows. I did a three-week retreat at a mountain cabin with two “hand maidens,” as we called my friends. I meditated under the same pine tree every day. I saw this episode as an invitation—or maybe a demand—to decide for myself how I thought life—both with a big “L” and a little “l”- worked, and how I wanted to work with it.

When I had a local recurrence in 2004, a naturopathic specialist told me that if I would ever consider doing chemotherapy, she would recommend I do so now. I did. I also had more surgery, radiation, and hormone therapy. At this time I was living with and caring for my aging father in the small orchard community where I’d grown up. My friends from the city took turns coming to stay with and look after us both. I learned a lot about giving up control.

Breast cancer made a dramatic reappearance in my life this summer. It had already been a hellish year: I traveled to take what seemed like a dream job that turned into a nightmare: I couldn’t find a place to live, negotiating the college computer system I relied on was a daily battle, my students hated me. My dog got cancer. Legal battles over my father’s orchard became increasingly bitter. Dear friends were disappointed in me. I was disappointed with myself. I returned to my now solitary house in the middle of winter and watched the surrounding pear trees ripped out by their roots, sick and dispirited. I fell into battle with my old foe, depression.

My one thread of sanity through all this was the yoga practice I started with Meg Becker in October of 2007. I’d been meeting with her regularly one-on-one for two-hour sessions, one to three times a week. Through my work with her, I had been coming into a more fully embodied understanding of many of the ideas I recognized from my years both on the cushion and reading the work of Chogyam Trungpa, Pema Chodron, Jiko Beck and Thich Nhat Hahn. My practice became not to resist my depression, but to develop compassion and curiosity about it, work with it in whatever way I could. Some days I was better at it than others.

“Notice the unkind mind,” Meg said to me, over and over, week after week. How unkind my mind could be was a revelation. It is one thing to contemplate compassion, quite another to do the heavy lifting required to actually apply it.

Coming out of the hospital days later, I felt like my spirit was a tiny kite tied to a huge hunk of dying meat. I did not even smell like a human being. I hated every thing about my existence. I wished that I had crawled under the porch like our old farm dogs did when they knew their time was up. That seemed to hold more dignity, more integrity than my current situation.

Meg says I was born a feisty spirit; I know that I have always been uncompromisingly truthful about my experience. (To my detriment, no doubt, at times—certainly to the discomfort of others.) Still, it is one of the tenets that drew me to Buddhism, the need to rely on one’s own experience. I will not, cannot fake a yes when all I’ve got is a No. So, now what? What do I do with this Big No?

I did not have an answer to that. I had to live with no answer. I knew that saying No to life, saying No to my experience, would not really stop or change anything. It was childish. But it was my deep-down honest gut response. It would not budge. It sat on my heart like a stone. It was ugly, it was sad, it was nasty—it was NOT spiritual in any sense of the word that I could understand. It offered me nothing. But once I could approach it with some gentleness instead of fear, distrust, disgust, contempt—once I could say even the smallest yes to my Big No, it started to shift. I did not know that would happen. I have to call it grace. I did it not out of any sense of spiritual wisdom—I did it because there was nothing else I could do.

I have always said that I am being dragged kicking and screaming towards enlightenment. My experiences on the cushion, in my studies, in my life keep pulling me forward and I don’t want to dig my heels in any more. I want to spend three months at Gampo Abbey because I want to get even closer to my Big No, and have even fewer distractions from it. It still scares me. I am not free from its grip. But I have tasted what that kind of freedom might be like. I think of it as a bigger container, a more spacious experience of the world. And if I am to be of service to myself or anyone else, I need to invest more time and attention in developing my tiny yes. Now is the time for me to practice as if my hair were on fire. This is what I hope the Yarne will help me do.

I don't know when I find out if they will offer me a spot. The applications are due by Nov 1st, and I sent mine off today. So. My part is done.
Posted by Althea Hukari at 5:53 PM 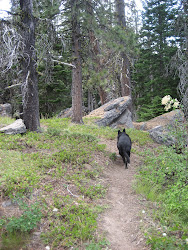 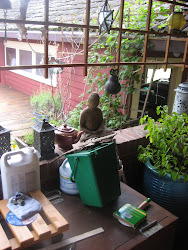 Who The Heck Do You Think You Are, Anyway?

I am just your average theatre artist/writer/teacher with a long and spotty meditation practice and a diagnosis of Stage 4 breast cancer. I write to discover what I think. I share this blog so my friends and family can find out as much or as little as they like about what is on my mind. It is public in hope that it may be of service to others.

Things That Make Life Worth Living

in no particular order:
1) Movies: The Last Station, The King's Speech.
2) The works of Anton Chekhov and Wm. Shakespeare.
3) The love of a good dog.
4) Reading something beautifully written.
5) Snow days.
6) COFFEE.
7) A friend you can call no matter what.
8) The winter sky.
9) The right poem turning up at the right time.
10) HOT WATER, especially in the form of a bath.
11) buddha, dharma, sangha (ie, an example, a path, a community of fellow travelers).
12) Gratitude. 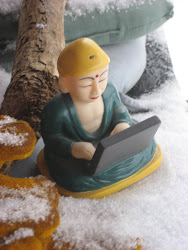 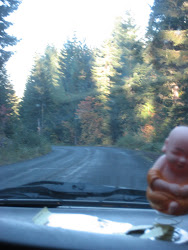 buddha on the road